There has been much discussion over the years over how and why wing paddles are more effective than the old ‘drag’ blades. A common argument is based on the view the wing blade does not move backwards (locking the blade) during the stroke, making it more efficient. The explanation for this ability (to ‘lock’) is that the aerofoil section of a wing paddle makes use of the Bernoulli effect to generate ‘lift’ on the front of the paddle blade, so it doesn’t slip backwards in the water (unlike drag blades, which do).

So lets start by having a look at the Bernoulli Effect

We’ll skip the equation (but feel free to check it out in Wikipedia if it appeals), but we’ll elaborate on the classic representation of the Bernoulli effect creating lift on a wing, as shown below. 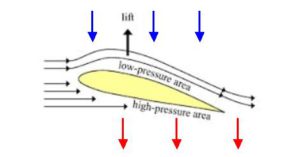 This results in the wing leaving a large downward moving mass of air ‘behind’ it, as it moves forward. In the ‘aircraft’ world this is referred to as downwash.

It’s not uncommon (if you bother to look!) to find discussions on aviation ‘enthusiasts’ websites arguing whether wings get lift using the Bernoulli effect (sucking themselves up), or Newtonian principles (pushing air down), and there seems to be strong support for both arguments! But a wing ‘sucking’ itself upwards without pushing air downwards simply can’t happen, it contravenes the accepted laws of motion. In this case Newton’s 3rd Law – ‘every action has an equal and opposite reaction’. (Just in case you’re wondering if the work of a physicist born in the 17th century is relevant here- I quote from a NASA educational website –“The motion of an aircraft through the air can be explained and described by physical principals discovered over 300 years ago by Sir Isaac Newton). If it’s good enough for Sir Isaac & NASA, it’s good enough for me!

Anyone who has stood near a helicopter taking off will be well aware there is an awful lot of air being pushed very enthusiastically downwards, the helicopter is not simply ‘sucking’ itself upwards due to the Bernoulli effect!

So an important point to realise when we’re talking about what the paddle blade is doing, is that water has to be accelerated backwards to propel the boat forward. This isn’t a ‘view’ I’m proposing, it’s a requirement of the laws of Physics. Even with Bernoulli’s help (with a wing paddle), we still need to ‘throw some water backwards’, just as we did in the days of the ‘drag’ blade.

Now back to our helicopter analogy.  We could note that when the helicopter is hovering or (climbing) the blades are not moving downwards (the equivalent to a kayak blade moving backwards during the stroke).  We could in theory replicate this effect in a kayak by doing a purely ‘sculling’ stroke. Moving the blade sideways away (90 degrees to the centreline) from the boat at a ‘suitable angle of attack, to push water backwards, and hence the boat forwards (but no you can’t move your top arm forward or your bottom arm backwards, they can only go sideways). This would achieve the famous ‘blade not moving backwards’ (or even moving forwards) situation.  But I’m yet to observe this paddling technique at a major event.  Even if there is some ‘sculling’ effect in the wing action, we’re still predominately flapping our wings up and down like the birds, rather than slicing our aerofoil section wings through a fluid like aeroplanes and helicopters

As the paddle moves through an angle (when viewed from the side) of 90 degrees or so during the stroke (very paddler dependent), much of it is definitely moving forward, at the same time as some of it is moving backwards!

I’ve reproduced the picture in question below (sorry about the quality). The red lines and yellow text ‘show’ the forward movement of the ‘paddle’ (My interpretation of this is that it is happening predominately above the water surface). I’ve added the green lines and purple arrow to show the blade moving backwards below the surface, roughly pivoting around the shaft / blade join (once the blade is buried). 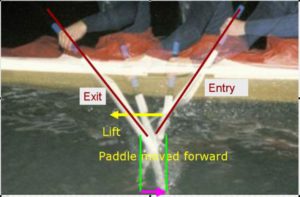 Because of the constantly changing angle of the paddle, this backwards movement predominantly occurs towards the bottom of the blade. So with this particular image the paddle might be considered to be ‘locked’ roughly around the water surface ‘pivot point’. But most of the blade is still moving backwards! (This ‘pivot point’ may vary somewhat with different paddlers techniques and stroke rate)

With the sideways movement during the ‘wing stroke’, a certain amount of force may be generated by a ‘sculling’ action, reducing the backward movement of the blade. But if the bottom of the blade was not moving backwards, even with Bernoulli’s help (with the angle the blade moves through during the stroke), the top part of the blade would be pushing water forwards (and not helping the wings famed efficiency)

So why is the wing blade more effective than a drag blade?

Reading the (American) patent application by the wing ‘inventors’ Stefan Lindeberg & Leif Hakansson, it’s interesting to note that the ‘wing’ technique came before the ‘wing’ paddle.

‘Many present day competition canoeists have transferred to a technique in which the powerful muscle groups of the back are used during increased twisting/rotation of the trunk, and less bending of the arms at the elbow. This new technique results in a greater pulling force and causes the paddle to move further away from the canoe. When seen in relation to the canoe, the paddle is driven in a rearward and outward path’.

Lindeberg & Hakansson designed a blade to work better with sideways movement and make use of the Bernoulli effect, but even they stopped short of claiming the blade didn’t move backwards.

The present invention relates to a blade which is constructed primarily for this new paddling technique. Thus, when using a blade according to the invention the blade is displaced rearwardly through the water to a smaller extent, and power losses resulting from the formation of eddy currents around the blade are greatly reduced.

The backward movement of the blade during the stroke is reduced, as a larger mass of water is being accelerated ‘more slowly’ than a similarly sized ‘drag’ blade (due to the Bernoulli effect). The maths of why this is more efficient is covered in ‘The Effects of Blade Size on Performance’.

As well as accelerating a larger mass of water backwards (thanks to the Bernoulli effect), the wing paddling technique also means the blade is constantly moving outwards towards ‘stationary’ water (and away from water it’s already started to accelerate). 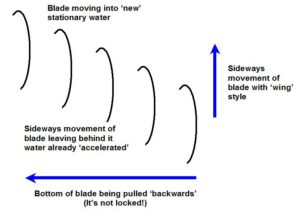 This again results in a larger mass of water moving more slowly than would be the case with the ‘drag’ technique. Note this last feature is a function of the technique, rather than the blade design itself.

So I would suggest the wing superiority is partly the ‘wing’ technique, and partly the greater efficiency of larger (or effectively larger) paddle blades.